Seal Day on the Hill

Home/News/Seal Day on the Hill

Seal Day on the Hill

Ottawa, Canada – February 3, 2014 –   For this year’s  Seal Day on the Hill, the government came together to affirm their support for the sealing sector.  During Question Period several Members of Parliament gave statements of support, including the Minister of Environment  who stressed the government’s support for sealers and the devastating impact of the EU ban on northern and coastal communities. 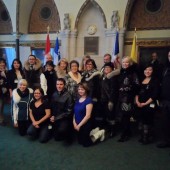 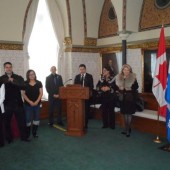 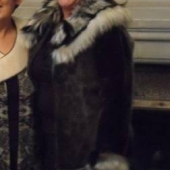 The day included a very well-attended reception following Question Period hosted by the Minister of Environment; the Honourable Leona Aglukkaq. The reception brought together over 100 Parliamentarians and industry stakeholders to show their support for the sealing sector and to highlight seal products. Guests included the ambassadors of China, Norway, Turkey and Italy. Dion Dakins, Chair of the Sealing Committee, was the master of ceremonies during the event, where 13 Parliamentarians modelled a range seal fashions from prominent Canadian designers.

Just a week after the Government officially filed its appeal of the World Trade Organization decision to uphold the EU ban on seal products, this important event served to emphasize the Government’s continued commitment to Canadian sealing and to educate and inform a wide range of parliamentarians on the issues and challenges facing the sector.

Below is a transcript from the encouraging remarks made during Question Period:

Mr. Speaker, I am pleased to rise today wearing seal to support this year’s Seal Day on the Hill and the Canadian sealing industry.

The sealing industry is vital to the families who live and work in many northern regions of our country. We are proud global leaders in implementing best practices and ensuring sustainability for the sealing resource. My family has depended on the seal for many generations for food, clothes, and medicine, as have most northern aboriginal families.

Liberals will continue to fight against those who spin misinformation and try to buy people’s livelihoods with campaigns that are misguided and false. That is a shameful example to be followed by anyone.

Mr. Speaker, today is Seal Day on the Hill, and I invite all parliamentarians to join us in the Speaker’s dining room at 3:30 p.m. today to sample some meat and enjoy a seal-product fashion show.

I am proud to reaffirm that our government will continue to defend the seal hunt as an important source of food and income for coastal and Inuit communities.

Sealing plays a vital role in the lives of tens of thousands of Canadians, and Canada remains steadfast in its position that the seal harvest is humane, sustainable, and a well-regulated activity. We will continue to advance that position while fighting the European Union and the seal ban with the World Trade Organization. We will continue to stand behind the sealing industry, to ensure that our traditional industries remain a strong and sustainable part of our rural and northern communities.

I encourage all parliamentarians to show their support for the seal industry at today’s events.

Mr. Speaker, today is Seal Day on the Hill. The sealing industry plays a crucial role in the economies and the cultures of Inuit and Canadian coastal communities. The European Union’s decision to ban seal imports is based on misplaced emotion, not on science or fact. Canadians stand behind our government’s decision to appeal the WTO ruling. In fact, a poll today showed that the clear majority of Canadians support the seal hunt.

Will the minister tell us what our government is doing to protect sealers?

Leona Aglukkaq Minister of the Environment:
Mr. Speaker, I would like to thank my colleague for that question. The European Union ban on seal has had a devastating impact on northerners and coastal communities. Sealing is a part of our heritage and our livelihood.

I am proud to restate our government’s support for sealers. That is why our government submitted its appeal this month to the WTO on its ruling to uphold the ban. It is encouraging to see that the majority of Canadians support our approach to defend Canadian sealers. I just wish that the NDP and Liberals would get on side.

Thanks to Glen Doucet, Executive Director of the Fur Institute of Canada for permission to reprint his article.