A report titled: “2019 status of Northwest Atlantic Harp Seals” was released last week by The Canadian Science Advisory Secretariat for the Newfoundland and Labrador and Quebec Region with the department of Fisheries and Oceans Canada. Harp Seal abundance is estimated using a population model that includes removals, annual reproductive rates and periodic estimates of pup production. The most recent pup production survey was carried out in March 2017.

Aerial surveys were carried out in March 2017 to estimate pup production. Data on recent reproductive rates and removals were also available. Using these data, the current status of the Northwest Atlantic Harp Seal population was assessed. The estimates of total population presented here are based upon a population model that incorporates pup production estimates, as well as reproductive rates, Canadian harvest information and ice related mortality up to 2019, and Greenland harvest information up to 2017. 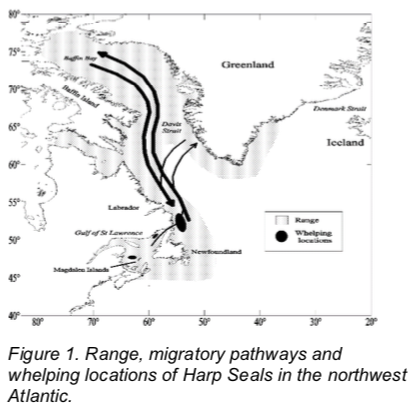