The Natural Environment and Seals

Of all the environmental factors that affect the harvesting of harp and hood seals during late winter and early spring, the most important is the quantity and condition of sea-ice.

The relative importance of other environmental factors is determined by their influence on the growth, distribution and character of these protective ice-fields. 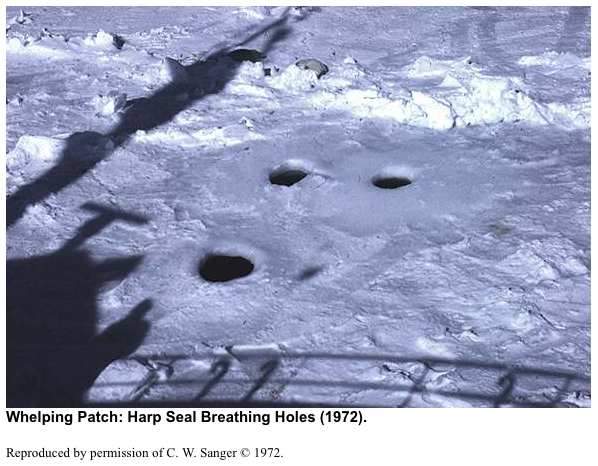 The seasonal formation and movement of sea-ice off southern Labrador and northeastern Newfoundland (the “front”) is generally away from the land toward the south and the southeast. This occurs in response to the general southward flow of the Labrador Current and the prevalence of offshore westerly winds.

While varying greatly from year to year, the total area of the whelping and moulting patches has always been extensive. The normal pattern of seasonal growth, and the degree of variation in the location of pack-ice within the same year, has also been wide-ranging. Annual variations occur as a result of temperatures, ocean currents and prevailing winds. Within each season, however, the largest single determinant of the relative day-to-day configuration of the ice-floes is the strength, duration and direction of winds.

The presence of offshore pack-ice during the early spring, then, provided many coastal settlements on the headlands and outer islands with relatively easy access to a rich resource and a temporary surface on which to hunt. This practice, however, also involved difficulties and hazards in navigating vessels and harvesting the seals. If they wished to be successful, or even to survive, sealers had to adapt to the dangers posed by wind, sea and ice. Much depended on their knowledge and experience, and to a large extent upon the technology at their disposal.