Omega-3 and Your Diet

Over the past five thousand years, western society has evolved from a hunting diet to one largely based on agriculture. Many nutrients formally consumed in abundance have now become scarce. One of the nutrients still considered absolutely essential for our good health and normal development, but now largely missing from our diets, is the family of polyunsaturated fatty acids know as Omega-3.

“In comparing seal oil with fish oils, assimilation of seal oil into the body is more efficient than fish oils.” 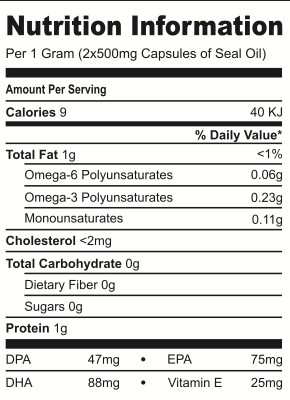 Coupling this fundamental change in dietary nutrients with our society’s rapid adoption of highly processed foods, it is little wonder that western society is experiencing an impressive escalation in diet-based/lifestyle disease. These diseases range from asthma and obesity to atherosclerosis (hardening of the arteries) and cancer. This has been best demonstrated through studies of native cultures with a traditional marine diet high in Omega-3, such as the documented findings of the Norwegian diet.

When Norwegians were forced to return to its traditional marine-based diet during the shortages of World War II, the death rate (of heart disease, cancer, etc.) dropped by 40%. This rate, however, returned to pre-war levels as soon as the war ended and Norwegians returned to their western-based diet of highly processed foods. It is of great interest that during the war, the Norwegian decrease of heart disease coincided with a 50% increase in Omega-3 intake. Another example of the health benefits of a traditional marine diet, high in Omega-3, is found with the Inuit of the High Arctic.

Despite their large daily intake of fat, the Inuit blood lipids remained within normal levels, their incidence of heart trouble was low and they were relatively free from hardening of the arteries. Like the Norwegians, as the Inuit have adopted western diets, their incidence of diet-based disease has risen to western levels. Our bodies do not naturally synthesize, or replenish, Omega-3. Therefore it must be obtained from external sources through a diet rich in Omega-3, or through the use of dietary supplements.

As seals are much higher in the food chain than fish, seals use their digestive system to filter out the many natural impurities found in fish. The “bio-filtering” naturally enriches and adds an essential element not found in most fish oils; DPA. The natural purity and quality of seal oil is therefore higher than most fish oils.

What the Experts Say

Dr. Fereidoon Shahidi of Memorial University of Newfoundland (MUN), a world-renowned scientist on seal product development provides the following explanation: “In comparing seal oil with fish oils, assimilation of seal oil into the body is more efficient than fish oils. EPA, DHA, and DPA in seal oil are located primarily in the terminal positions of the triglyceride molecules while they are preferentially present in the middle position of triglycerides in fish oils. This difference in the location of the Omega-3 PUFA is a major reason for the superior effect of seal oils compared to fish oils in disease prevention and potential health benefits.”