(i) Equipment: The most common method of killing young harp seals has always been to strike a hard blow to the head with a blunt instrument. In the earlier days, the boat-hook, or gaff, was used as an aid to travel over ice and especially to cross open leads of water; the blunt side of the hook was used as a weapon to crush the skulls of the whitecoats. In the 1960s, wooden clubs replaced the gaff. It has always been traditional to use firearms to shoot older seals, since they have to be killed from a distance.

(ii) Pelting: A skinning knife is used to pelt the animals. The intent is to remove the fat, hide and foreflippers (the sculp or pelt) from each carcass without causing damage to the skin. 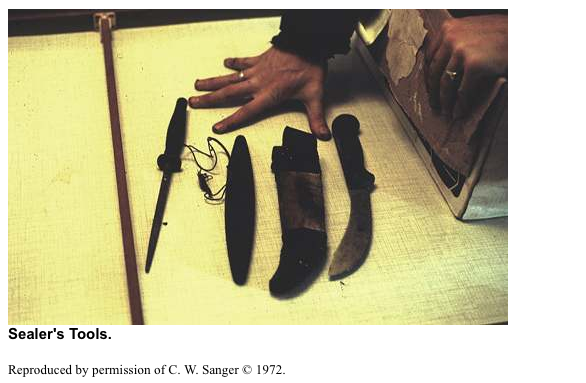 (iii) Towing: Another important piece of equipment carried by sealers, especially during the earlier phases of the hunt, is a tow rope, usually 3 to 5 m long, with an iron or steel hook at one end.

The pelts are towed directly to the vessel or gathered at central points, called pans, to be collected later. If time permitted, these are often doubled (gathered into larger pans). (iv) Stowing: After the pelts have been taken aboard they are stored on deck, hair to hair and fat to fat to reduce staining of the hides. They are kept on deck until “chilled,” before being stowed below, thus reducing the tendency of the fat to render and spoil. 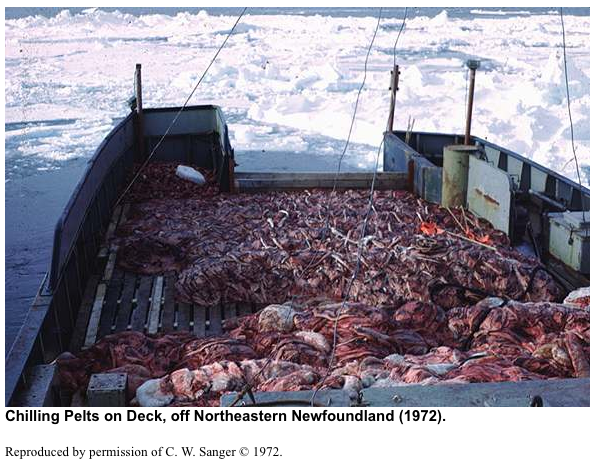 (i) Transition from subsistence to commercial: Seals provided pioneer Newfoundlanders and Labradorians with food, oil, clothing and a wide variety of other items crucial to maintaining an often fragile existence. With the development of a large-scale commercial seal fishery, income earned from sealing became a significant contributor to economic survival within the annual activity cycle.

(ii) Oil:  Seal oil, rendered from blubber, was originally the most important commercial product. It was used primarily for domestic and public lighting, to make soap, and in the preparation of leather (currying: softening of hides) and textile manufacturing. Seal oil is now exported mostly for processing into machinery lubricants, edible oil products, and cosmetics.

(iii) Pelts: Seal skins were processed to remove blubber and meat and then sent abroad to be made into a variety of articles that, unlike oil, were not as easily supplanted by more modern products. Pelts thus replaced seal oil in order of economic importance towards the end of the 19th century. Today, the hides are mostly used to produce a variety of clothing from coats and jackets to handbags and belts.

(iv) Meat:  Meat has always been less important than oil and pelts as a product of commercial sealing. Nevertheless, seal meat is consumed extensively throughout the Atlantic region, although the sale of fresh and frozen meat is confined primarily to Newfoundland. There have been recent efforts to expand markets through the development of new products such as sausages, pie filling and pizza topping.