The sealing industry developed in response to the abundance of sea mammals that frequent Newfoundland and Labrador inshore waters. The very nature of the venture has been strongly influenced by the habits and character of the seals.

Although hood seals have sometimes been harvested, the harp has been the mainstay of the sealing industry. Pregnant harp females in the western Atlantic herd swim northward in February in search of suitable birthing ice. They form large groups and give birth at approximately the same time each year, so the young seals (whitecoats) are born in close proximity to one another, forming whelping patches that often cover several square kilometers of ice. 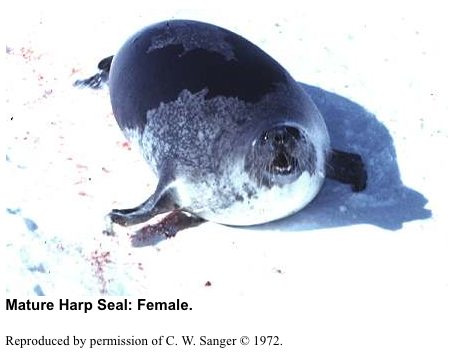 The harp pup loses its coat of white downy hair within three weeks. Known then as a “ragged-jacket,” and finally, in its first year as a “beater,” the young harp in the process of becoming an adult seal (mature, saddleback, harp) is called a “turning seal” (turner), “immature,” or “bedlamer” (bête de la mer). Sexually mature at approximately four years, adult seals have an average life span of over 20 years.

Initially harps of all ages were caught by landsmen. However, the whitecoat and moulting (shedding of winter coats) patches became the principal targets of the offshore sealing fleet. Although more vulnerable at this time than at any other stage in their life cycle, these seal herds were given some degree of protection by the hazardous environment, and the hunters’ limited ability to navigate the icefloes.

In Canada’s remote coastal and northern communities, sealing is an important part of the way of life and a much needed source of income for thousands of families. Beyond fur, seals are also used to produce meat products and oil products rich in omega-3 fatty acids. The revenues generated from this activity are an integral and vital component of the annual income earned by sealers. This fishery contributes to the diversity of income sources available in fishing communities. In some years, good seal prices or harvests offset lower prices or poor catches in other fisheries.

“When there is a good seal harvest, it can account for up to 30 percent of my salary. Just in the Magdalen Islands there are 900 sealing licences. 900 licences mean 900 families.” Denis Longuépée, Sealer, Magdalen Islands, Quebec.