Prior to the arrival of European settlers, a much larger population of harp seals migrated to the waters off Newfoundland and Labrador. Settlers began exploiting the population, with kills peaking in the middle of the 1800s. In the first half of the 1840s, 546,000 seals were killed annually.

Seals have been used for their pelts, their fat (seal oil was often used as lamp fuel, lubricants and cooking oil, and for processing such materials as leather and jute, as a constituent of soap. 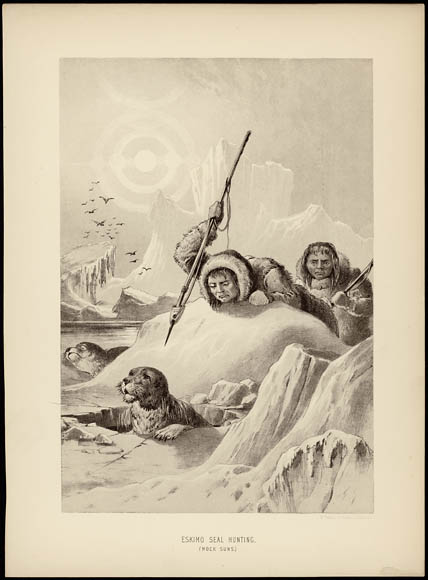 Archeological evidence indicates that Native Americans and First Nations People in Canada have been hunting seals for at least 4,000 years.  Traditionally the Inuit diet is rich in fish, whale, and seal. Seal meat was an important source of fat, protein, vitamins  and the pelts were vital for their warmth.

Traditional Inuit seal hunting accounts for three percent of the total hunt; it is excluded from the European Commission’s call in 2006 for a ban on the import, export and sale of all harp and hooded seal products.  Ringed seals were once the main staple for food, and have been used for clothing, boots, fuel for lamps, a delicacy, containers, igloo windows, and furnished harnesses for huskies. Though no longer used to this extent, ringed seals are still an importantfood source for the people of Nunavut.  Called nayiq by the Central Alaskan Yup’ik people, the ringed seal is also hunted and eaten in Alaska.

Europe
Seals were hunted in northwest Europe and the Baltic Sea more than 10,000 years ago. The first commercial hunting of seals is said to have occurred in 1515, when a cargo of fur seal skins from Uruguay was sent to Spain for sale in the markets of Seville.

North Atlantic
Migratory fishermen began hunting seals in the region of Newfoundland and Labrador and the Gulf of St. Lawrence in the 1500s. Large scale commercial seal hunting outside of Europe began with the Newfoundland seal hunt, which became an annual event starting in 1723 and expanded rapidly near the turn of the 18th century. Growing from the enormous international Grand Banks fishery, the Newfoundland hunt began with small schooner-based hunts. Kill rates averaging 451,000 in the 1830s, rising to 546,000 annually during the first half of the next decade, led to a marked decline in the harp seal population, which adversely impacted profitability of the sealing industry.