The Last of the Ice Hunters

Home/News/The Last of the Ice Hunters

The Last of the Ice Hunters

April 23,  2014: St. John’s –    The Last of the Ice Hunters is a history of the seal hunt, an industry now in decline, but one which provided the few opportunities for employment to Newfoundlanders and Labradorians during the 1930s. Written in the words of the sealers themselves, the book is a compilation of interviews conducted by students who trained under Professor Shannon Ryan of Memorial University of Newfoundland. This study of the seal hunt begins with a chapter on the introduction, background, and overall development of the seal hunt up to 1950.

The majority of the interviews describe sealing practices and traditions as they existed during the Great Depression through to the Commission of Government period (1934–1949). The interviews show the lives of the men, young and old, who worked hard, under harsh conditions, to provide for their families. This book also recognizes and commemorates the end of Newfoundland’s traditional seal hunt. The Last of the Ice Hunters is intended to provide a resource for others to use in their pursuits of information on sealers, their dependants, and the social and economic circumstances of the first half of the twentieth century. Buy your copy here online from Flanker Press 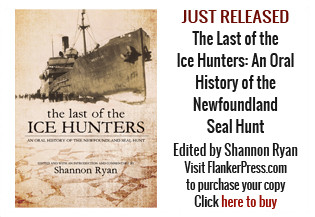