BC group calls for a cull to deal with pinniped predation

BC group calls for a cull to deal with pinniped predation 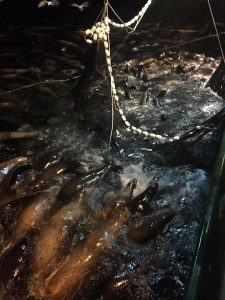 Pacific Balance Pinniped Society, a British Columbia group who want to create awareness of the impact of pinniped predation on salmon stocks and the resulting collapse of salmon populations, wish to revive the seal and sea lion hunt on the west coast, provoking a debate about the controversial practice and prompting scientists to warn of consequences for the ecosystem.

The group is working to see that pinniped populations are managed responsibly with a view to salmon stock preservation, growth and long-term sustainability. Pinniped predation has been shown to be one of the main contributing factors to the demise of many fish stocks. Healthy salmon stocks are critical to all British Columbians including Indigenous Peoples, commercial and recreational fishers, and the tourism industry.

Thomas Sewid of Campbell River and belongs to the Kwakwaka’wakw First Nation,a leading member of the Pacific Balance Pinniped Society says seal and sea lion populations have risen in recent decades and the animals have become dangerous pests to commercial fishermen while also contributing to the decline of salmon stocks.