In the Cape Cod area, fishermen who used to daily haul in about 30,000 pounds of fish are becoming more furious with the obvious signs of  the overpopulation of gray seals. Before the 1980’s seal harvesting was quite frequent until in 1974 The Marine Mammal Protection Act outlawed seal killing. Noted for their voracious appetite seals can cut into a fisherman’s haul and hence his bottom line, his livelihood.

New England Fishermen are no better off than their Cape Cod counterparts. Some even suggest a seal cull needed soon to remedy the situation with increased seal herd sightings. In this past February’s edition,  the South Coast Today online newspaper had the following headline, “Voracious protected seals starting to overrun waters off New England” an article by Steve Urbon.

The writer states that the Canadian hunt’s approach is the opposite of that of the United States….. to allow over population to flourish. Fisherman Bill Amaru of Orleans said that this is why Norway has such an abundant cod population with their controlled cull. “The only place where this doesn’t happen is where people are educated about marine mammals’ interactions”

Writer contends that there are now an estimated 16,000 or more seals, many of them the big gray seals, swimming in the waters off Cape Cod and the Islands. Fisherman Amaru puts their numbers at 50,000 or more; he has counted 16,000 at once on the beach at Monomoy.

Local fishermen there have formed The Seal Abatement Coalition, founded by Peter Howell, who want a new look at the Mammal Protection Act. This coalition feel herd numbers are now high enough they do not need “protection” any longer.

On the impact of over population in that region: “One of those impacts, many say, is the decline in cod populations in the Gulf of Maine and Georges Bank.”

Nils Stolpe, a Florida-based fishing industry journalist and advocate, calculated that since each seal consumed 5 percent of its body weight each day in squid, mollusks, crustaceans, and a variety of fish including rockfish, herring, flounder, salmon, hake, and lance, and don’t forget cod, it amounts to a quarter million pounds daily. Annually he added it up to 450,000 million pounds, about 200,000 metric tons.

Nils Stolpe findings on fish consumption by gray seals, can be found in this PDF study and report: (www.fishnet–usa.com)

Stolpe advocates amending the law to allow fisheries managers the ability to address marine mammals. But there is resistance. The New England Fishery Management Council refuses to readdress the Marine Mammal Protection Act. 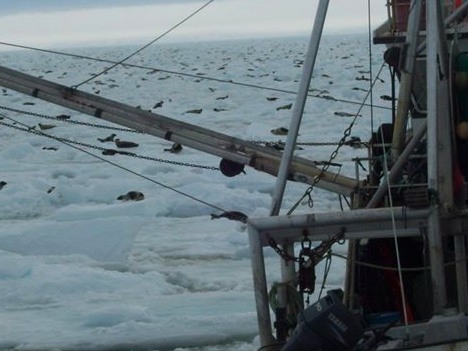