Rachael Petersen of  Global Voices Online last week wrote about the effect the EU ban is having on the indigenous way of life in Northern Canada. –

April 30, 2013: –    A European Union court in Luxembourg has upheld its ban on the commercial trade of seal products despite a challenge from Canada’s Inuit and several Canadian lawmakers that it cripples the indigenous people’s ability to make a living.

The court’s decision on 25 April, 2013 came after the Inuit Tapirii Kanatami and 20 other Inuit and sealing rights groups petitioned to overturn the seal ban, pointing out the importance of the seal hunt to Arctic dwellers for meat and income, critical in light of the increasingly high cost of living in the north.

The ban, enacted in 2009, prohibits the sale of seal meat, pelt, and oils. Though it includes an exemption for indigenous sealers, critics argue that the exemption has failed because the price of seal pelts has plummeted since the introduction of market restrictions. 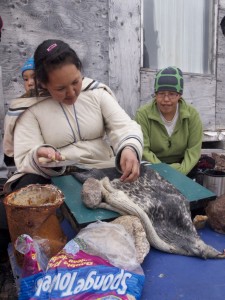 Inuit of Nunavut prepare a seal skin for clothing.     Photo by Rachael Petersen