Fur Day on the Hill 2016 was held November 29th in Ottawa with meetings with federal representatives of Parliament to showcase and lobby for continued support for all stakeholders of this invaluable historical Canadian industry. MP Yvonne Jones said:

(From the FIC) The Fur Institute of Canada (FIC) held Fur Day on the Hill 2016 in Ottawa on Nov. 29. The event brings together trappers, hunters, farmers, scientists, industry professionals, designers, auctions houses and other likeminded individuals from across the country, and gives them an opportunity to meet with Members of Parliament, Government Ministers and officials to discuss the key issues in the sustainable use community.

This years’ discussions focused on climate change adaptation, trade issues and the heritage and economic impacts of trapping, hunting and fishing activities on Canadians. The groups met with MPs from all parties along with Ministers and officials from a variety of key departments, and the results were extremely positive.

Following the meetings, the Outdoor Heritage Banquet and Auction hosted by both the FIC and the Outdoor Caucus Association of Canada (OCAC) took place with a theme: “Honouring Canada’s True Conservationists, recognizing men and women who fish, hunt & trap.” This event brought together nearly 200 attendees including representatives from the Canadian outdoor community, parliamentarians, senators and staff. The unique setting resulted in a very strong show of collective support for the outdoor industries.

We have some photos of our participation in the event below. 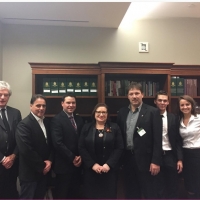 Fur Institute of Canada and the Canadian Sealers Association team up to promote the industry that is so important to many Canadian’s both culturally and economically (Photo: MP Yvonne Jones) 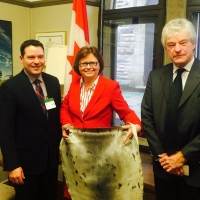 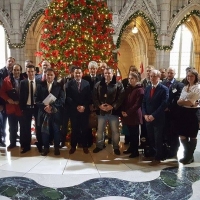