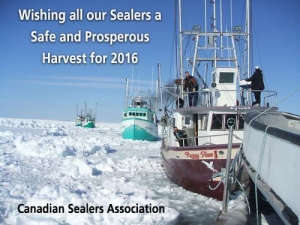 We want to wish all our members and sealers a safe and prosperous seal harvesting season which opened April 10th. Details of the 2016 Harp and Hooded Seal Fishery season are below.

DFO further advises Newfoundland and Labrador Seal harvesters based in the Gulf of St. Lawrence that the fishery for Seals will re-open in the Gulf, in Sealing Areas 9 to 23, and 25 to 27, at 0600 hours on Sunday April 10, 2016. The fishery will open for Gulf Longliners, Gulf Small Boats, Gulf Speed Boats, and Personal Use. This includes License Classes N200 to N204, and N401.

DFO further advises Seal harvesters having a homeport located between Big Brook to Noddy Bay inclusive, operating from vessels less than 40 feet, License Classes N203 and N204, that a portion of Sealing Area 5 will also open for Seals at 0600 hours on Sunday, April 10, 2016.

This “buffer zone” lies inside lines extending from:

Seal harvesters are advised to check with their buyers to confirm a market for their Seals before going Sealing. Additionally, all Commercial
Sealers and Personal Use Sealers are reminded that all landings must be hailed in daily, as per licence conditions.

Sealers are reminded that licences and licence conditions are available through DFO’s National Online Licencing System.

Finally, DFO reminds all Commercial Sealers that Humane Harvesting Training on the three-step process is mandatory for all Commercial Seal licence holders prior to participating in the 2016 season, and in any future Sealing seasons.

The Regional Director General, Fisheries and Oceans Canada, Newfoundland and Labrador Region, gives notice that Variation Orders 2015-019 and
2015-030 have been revoked and Variation Order 2016-010 comes into effect on April 1, 2016.