Legislating the blind spot: “The EU seal regime and the Newfoundland seal hunt” by Nikolas Sellheim

Legislating the blind spot: “The EU seal regime and the Newfoundland seal hunt” by Nikolas Sellheim 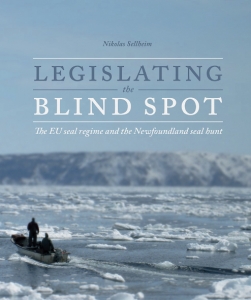 Legislating the blind spot : the EU seal regime and the Newfoundland seal hunt

In September 2009 the European Union adopted Regulation 1007/2009 on trade in seal products (Basic Regulation) due to concerns over the welfare of seals in the non-indigenous commercial seal hunts, particularly in Canada. Throughout the policy-making process these moral concerns were a crucial element of the political will to bar seal products from the EU market. Also research carried out as part of the preparatory works leading to the Basic Regulation appeared to support the claim that the seal hunt, unless conducted by indigenous communities, is cruel and unnecessary, calling for a legislative response in the European Union.

This dissertation screens the legislative process of the EU seal regime and considers in how far problem identification, goal setting and goal attainment are streamlined. Throughout this thesis it becomes obvious that also the claim of a European ‘moral concern’ is ambiguous although the Union successfully defended the regime under the ‘moral exception’ clause in international trade law. Even though animal welfare in general can be regarded as a Community value, the EU seal regime cannot be linked to other EU animal welfare laws as the regime does not have an impact on animal welfare in the seal hunts. Instead, the dissertation shows that, although the seal regime appears to be based on ‘objective’ scientific knowledge, it is based on an inherently biased approach towards the non-indigenous seal hunts.

Indicative for the neglect of remote coastal communities in which the seal hunt is carried out is the lack of recognition of its socio-economic and cultural value for the people involved in it. Based on ethnographic fieldwork in a seal hunting community and in the processing industry this dissertation shows how closely interlinked the seal hunt at sea is with the social fabric on land. Indeed, a lack of knowledge on conditions in the sealing industry existed prior to the seal regime’s adoption although its impacts were expected to be drastic. In spite of this gap in knowledge the regime was adopted.