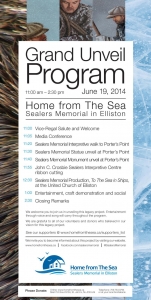 June 25, 2014: –    New photos by Jim Winter have arrived of the new Sealers Memorial Center and can be seen here 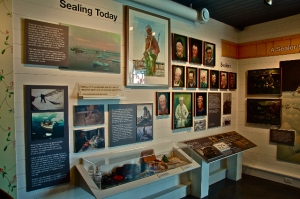 June 20, 2014: Update: Hundreds turn out for unveiling of Sealers Memorial

Hundreds made the trip to this Trinity Bay town for the ceremony, undeterred by the rain, to witness the reveal of a statue, monument and interpretation centre that pays homage to the men who lost their lives in the Sealing Disaster of 1914. The Telegram article and video is here:

The Sealers Memorial and Interpretation Centre will have it’s official opening this week in Elliston. A ceremony marking the centennial of the two great sealing disasters of 1914 in which 251 men lost their lives will be held June 19, at 11 am to cut the ribbon on an interpretation center about the history of sealing in the province, and unveil the statue at Porter’s Point depicting father and son Reuben and Albert John Crewes who were found frozen together on the ice, with father trying to shield son from the natural elements.

News Release from Home From The Sea:

Please note, parking will be available in areas away from the unveil site. Some areas will be bused to the event. We encourage attendees to allow time for parking and travel from parking areas.

Weather forecast for June 19th predict good conditions. A large portion of the unveil takes place outside. We advise attendees to prepare for all weather possibilities