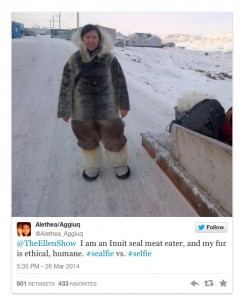 In response to talk show host Ellen DeGeneres’s  epic selfie at the Oscars this year, northern community sealers and families have opted to remind her in the way of “Sealfies” via Twitter that her criticism of Canada’s seal hunt is plain and simply misinformed and wrong. DeGeneres has donated  $1.5 million, (which was generated by the Oscar selfie) to the Humane Society of the United States, who makes no secret of its dislike for Canada’s sea hunt. Neither does DeGeneres as she claims on her own website the seal hunt “one of the most inhumane acts against animals allowed by any government”.

CTV The Social By Jessica Allen

Macleans.ca     Seal Hunters are people too